Our Story and Mission

When our founder and president, Simone Puccinelli, was a sophomore in college, she received a God-appointed email. The email detailed the serious financial issues faced by a school in Nakaseke, Uganda. If the school could not raise $500 for rent on their school +building, the students would be sent away without an education.

Simone decided that she could try to raise the money, and through the help of family and friends was able to do so. She also had a desire to visit Uganda to see where the money was being sent.

When she got to Uganda and met the man behind the email, Godfrey, and all of the students, she realized that this was a divine connection—something that she couldn’t just leave. Her life was going to be devoted to helping those children and the heart of Simone’s Kids was born. Simone’s Kids exists so that the children in Nakaseke can strive for a successful future through quality education in a nurturing environment

God’s Hope Primary School was the starting point of Simone’s Kids. Our Founder, Simone Puccinelli, was contacted in 2010 by Mr. Kayiire Godfrey requesting help to save a small school for orphans and impoverished children in the community. The school initially held classes under a mango tree. It was then moved to a rental building, and finally, on February 14, 2014, officially opened the new school campus on Simone’s Kids property.

Origin: Story of Godfrey and Hope

Godfrey Kayiire and his wife, Hope, are the current administrators of God’s Hope Primary School. The couple started with only a dream to be able to help the poor and orphaned children in their community. Godfrey and Hope are passionate about the cause because they were both orphaned at a very young age as well and have a personal empathy toward the children they serve. In fact, Hope is unable to celebrate her birthday because both of her parents died before she was old enough to remember. Godfrey and Hope were both sponsored by an organization that supported them through school. They both attest that, without the outside help, neither would have been able to complete their education. Godfrey was so grateful for the help that he received growing up that, after graduation, he volunteered for two years at the school where he received his primary education.

In 2008, Godfrey and Hope took the little money that they had and established a primary school in Uganda. This was not an easy task for the couple, as their funds were quite limited. During the first term that the school was open, they had forty-six students and eight teachers. The students that attended were not able to afford payment for tuition, and our school remains that way to this day. In 2010, Simone began communicating with Godfrey, questioning him about the needs of the school. During that year Simone was only able to provide the rent for the school buildings. However, that was enough to keep the school open for the children.

Godfrey remembers, “I didn’t believe that she was going to send the money until I received it in my account. Glory be to our God who is always faithful even if people may not be!”. In 2011, Simone’s Kids was able to raise enough funding to provide complete financial support for the entire school.

After founding Simone’s Kids in 2010, Simone Puccinelli determined the biggest need in the Nakaseke community was a place for orphans and vulnerable children to receive a quality education. In 2010, God’s Hope Primary School was being run out of dilapidated war-torn buildings. It was not a safe or effective learning environment. In 2011, Simone’s Kids kicked off their “Building a School” project. Over the next three years, Simone’s Kids was able to purchase land, acquire legal status with the Ugandan government, and construct a new facility. The new God’s Hope Primary School boasted ten classrooms, a large office, bathrooms, and a kitchen. 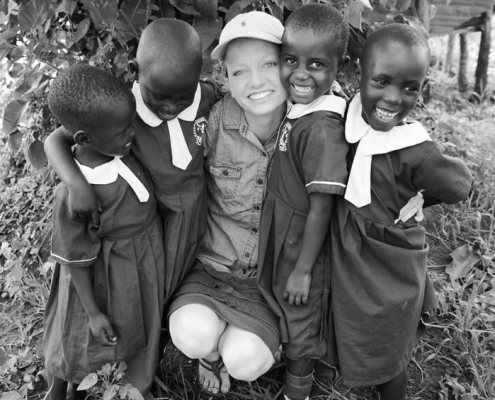 Simone Puccinelli started Simone’s Kids during her sophomore year of college, with a dream of helping orphaned children attend school. Simone is married with one child. She currently lives in the United States but makes frequent trips to Uganda. She loves cooking, hiking and inspiring others to fulfill their dreams! 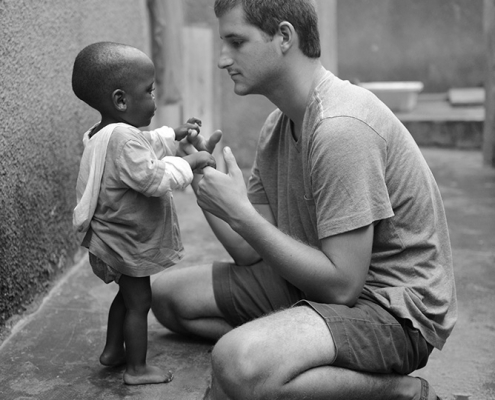 Mason Satterfield went on a team trip with Simone’s Kids in 2012, and from that trip, he knew that God had plans for him in Uganda. He continued serving on team trips and extended stays in Uganda throughout college. After graduating, Mason officially made the move to Nakaseke. He lives there full-time working as our program director for Simone’s Kids and loves everything about life in Uganda. 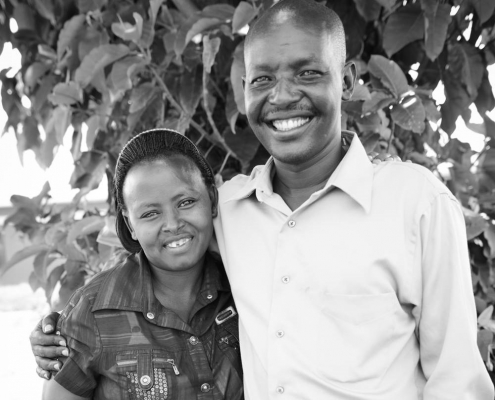 Kayiire Godfrey grew up in an orphanage home in Nakase, Uganda. He started Gods Hope Primary School with his wife, Hope, in 2008. They started the school to help the orphans and needy kids who remained in Nakaseke after the Cold War of Uganda, from 1980 to 1985. They have five biological children. Godfrey and his wife are the administrators of God’s Hope Primary and Secondary School. 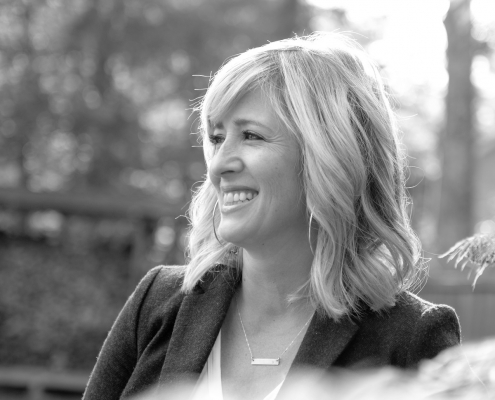 Katy Davis began working with Simone’s Kids in 2016. She had been serving as a board member and felt God leading her to do more hands-on work with the organization. She has visited Uganda twice and works directly with the schools in the Sponsorship program. Katy’s passions include her dogs and raising puppies, walking and outdoor activities, as well as entertaining friends and family in her new home! She desires to continually grow her walk with Christ through Bible classes and building relationships in her local church. She has been a hairdresser for 16 years and is married with two sons aged 24 and 18! 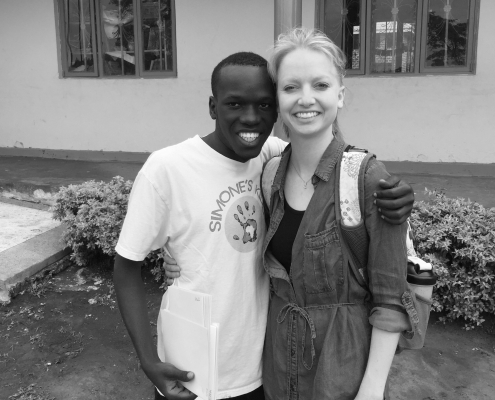 Chris Gitta was born in the slums of Kampala. My parents broke up when I was two years old, and I grew up with a single mom who was hustling to make a living. Kayiire Godfrey hired me up because I had skills in computing. I started working with the primary school as a secretary, but since I was young my dream was to help needy kids who grew up in situations like mine. I got the opportunity to meet Simone who also taught me about Jesus. I grew up in a Muslim family and I was feeling connected to God when she showed up. I am happy to work as the sponsorship coordinator at Simone’s Kids because I am living my dream! 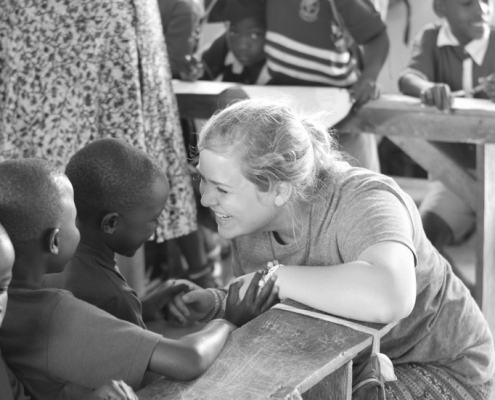 Morgan is serving as the Pre-K Director at God’s Hope School. She heard about Simone’s Kids in 2014 through an article in her local newspaper and has been going on mission trips and volunteering ever since. Morgan has taught pre-k for two years in Georgia and has a true passion for working with kids. She says, “One of my forever goals is to help give kids all they need in order to be everything they want to be, to help them know and believe how special they are, and more importantly show them how deeply loved they are by our Heavenly Father.” 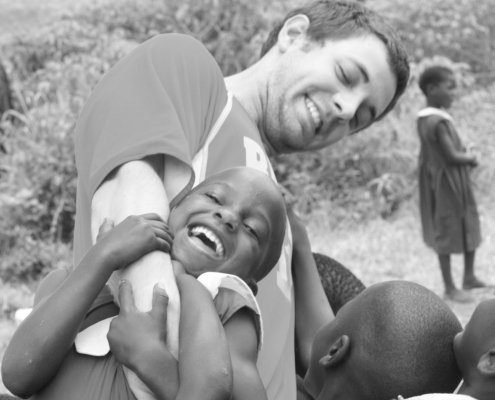 Michael has been involved with Simone’s Kids since 2010 and has been married to Simone since 2012. He will graduate from medical school at the University of Alabama at Birmingham in June 2020 after which he will start training as a heart surgeon. Michael has been on multiple trips to Uganda to work at the local hospital. Michael focuses on internal research and development with specific emphasis on the output and effectiveness of our educational program.

Three ways to get involved with Simone’s Kids:

1. See our work in action (We respect your inbox!).

2. Provide a Scholarship
Become part of the steady heartbeat of the organization. Our scholarships literally are the reason the school continues to flourish. It is because of our sponsors that we can keep our school open and running.

3. Visit the School
Our group trips usually happen during the summer. If you are interested in joining the team next summer, get details and apply here.

4. Support us while you shop!
Sign up with Amazon Smile and Giving Assistant and a portion of your purchases will be donated to Simone’s Kids.