My middle school self knew that one day I was going to go to Uganda. I did not know the when, how, or why, but I knew that it was part of God’s plan for me. I had experienced some Ugandan culture in the United States, and from that moment on, I had a longing to be with the people of Uganda in their country. That longing continued to pull on my heart. Little did I know that sitting next to a new person in a summer class, almost 10 years later, would lead me to what I now consider a second home in Uganda. 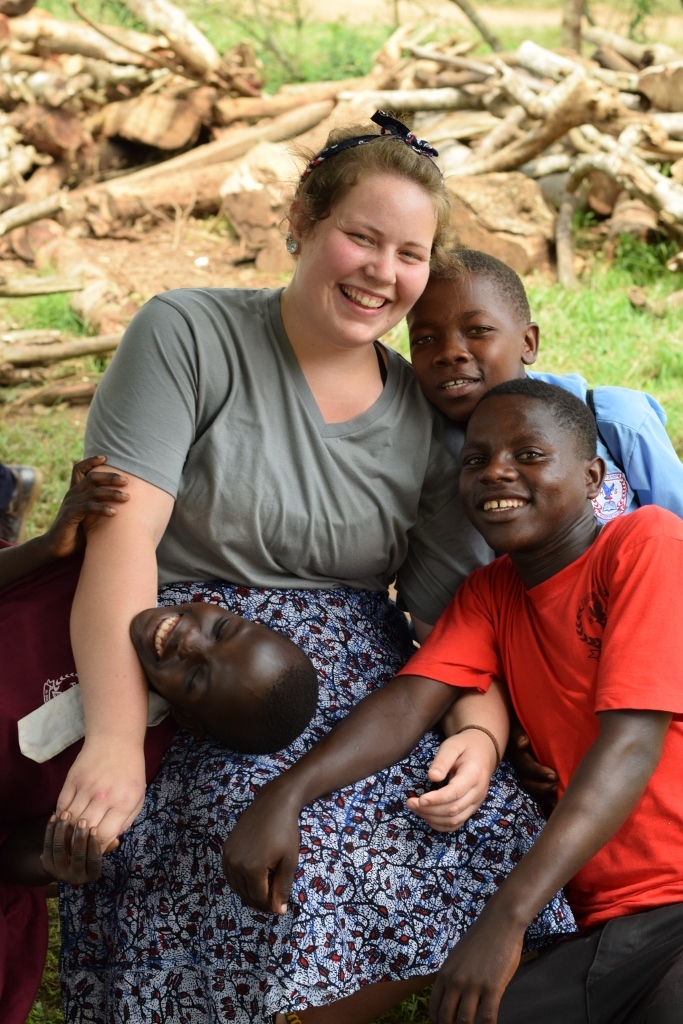 That new person was Mason Satterfield, Director of Programs for Simone’s Kids. He introduced Simone’s Kids to me via an assignment for our class. I was intrigued by his joyous demeanor when talking about the organization. I instantly knew that Simone’s Kids was something special, and I knew that I wanted to be a part of the organization in some capacity. Our summer class came to an end, and a year later I started my journey with Simone’s Kids. I attended the organization’s fundraiser, A Classroom for Christmas, in November 2015. I had the opportunity to hear Simone and Godfrey, the headmaster of the primary school, speak. By the end of that night, I knew that I was going to go to Uganda. God had orchestrated a plan so perfect that started with a college class that led me to A Classroom for Christmas which ultimately led me to Uganda. This was the capacity in which I was to support Simone’s Kids, and I could not have been more excited by what was to come.

June 15, 2016, I stepped out of a plane in Uganda with a team of 7 ready to serve with Simone’s Kids. The moments that unfolded next overwhelmed my soul. We exited the airport doors to be quickly engulfed in a sea of hugs and hellos from Ugandans that did not know us yet were simply overjoyed to receive us in Uganda. This moment was multiplied over the next 2 ½ weeks. I experienced life in a way that only one can experience themselves. Suddenly, I was part of a family that extended over 2 schools, a library, boarding sections, kitchens, and the community of Nakaseke. I felt at home within 24 hours. The theme of this trip was ultimately celebration. We celebrated the coming of our team, the new leadership of the secondary school, the baptism of students and adults, the students’ hard work with new school supplies, and so much more. Through these celebrations, I was able to meet the people that are now so precious to me. I met my Ugandan family made up of Godfrey, Hope, and their children. I met the staff of God’s Hope Primary and Secondary schools. And I met the students at each school who continue to amaze me with their grit and determination for a better future. I also met the little girl who would soon steal my heart.

On the second day of the trip, I felt a small hand reach for mine. This hand belonged to a precious little girl in P1. Her hand did not leave mine for the remainder of the trip. Every moment she was not in class, she would find me on the school compound and grab my hand. She barely knew any English, but that did not stop us from forming a bond. This led to us getting to experience life together. I even had the chance to take her shopping alongside all our team and their sponsor students. She chose me. Therefore, I chose her. She is now my sponsor child. She was just one of the many reasons I knew that I would return to Nakaseke and continue to volunteer with Simone’s Kids.

I was beyond grateful for my time in Uganda, and I was extremely emotional when it came time to say goodbye to all of our new friends and family. All I could do was thank God for the relationships I built with the people and pray for another opportunity to return to Nakaseke with Simone’s Kids. That opportunity came sooner rather than later.

June 6, 2017, I returned to Nakaseke, Uganda, for a longer stay. I traveled with 2 of my closest friends from the previous team trip, and we were ready to once again serve and live life amongst the people of Nakaseke. I experienced many of the same events that I did the previous year, but with a new outlook. I now felt a sense of comfort because I knew my surroundings. I felt comfortable walking the streets of Nakaseke. I knew how to get to my friends’ houses, and I knew where to get breakfast or a drink. I was at ease when I was sitting on the wall of the bakery at the secondary school and walking from classroom to classroom on the compound. I recognized faces, and they recognized me. One of my favorite memories from this summer was being welcomed not by strangers but by friends. Those hugs at the airport from my sponsor child, who chose me, and the hugs and “you are most welcomes” from the secondary students at our guest house solidified that I was indeed back in a place I love. I felt at home. For this reason, I could build upon the relationships that were cultivated the previous year.

I mentioned that the theme of my first trip was celebration. I feel like the theme of this summer’s trip was family. I met my sponsor child’s family. She has a brother and a sister at God’s Hope Primary and a little sister at home. I met her mother and received a tour of her home. At that moment, I knew exactly what she needed, and I was thankful for the opportunity to provide necessities for her family. She chose me last summer, and when I chose her, I also chose her sweet family.

I met the families of students that I knew from the previous year that are represented at God’s Hope Primary and Secondary schools. I met the three other siblings for a total of six that are represented at the secondary school, and they are some of the most amazing young men and women I have ever had the pleasure of knowing. I met the brother of one my closest friends at the secondary school. They make one of the best brother duos of all time. I also met mothers and grandmothers of our primary students when we went on home visits to deliver Mother’s Day gifts. Family is one of the most important things in my life, and it was a true pleasure to meet the families of these people I have grown to love and experience what family means to them. I also met one more important person on this trip.

I had another student choose me this year. Over the past year, the secondary school’s attendance has doubled. Therefore, there were many faces I did not recognize. There was one face that caught my eye the first time the secondary school choir performed for the team. She was on the front row, and she was fiercely praising the Lord with all her being. I knew that there was something special about her. As the weeks went on, I noticed that she went out of her way to speak to me during the breaks of her school day. We talked almost every day, and I quickly realized she was going to be my second sponsor student. She chose me, and I chose her. I wanted to sponsor her, but she was not in the Simone’s Kids program. I was happy that she could pay for her schooling, but I felt like I was still supposed to be her sponsor. Ten days later I received a message from Mason telling me she was now part of the program. I responded without hesitation, and much to my surprise, Mason let me tell her via video chat. I was overjoyed to be able to tell her “in person” that I chose her. She is now a part of my family, and I could not be happier.

I have learned so many things from my time spent in Uganda. I have learned that a simple act of kindness can change the world of one student and eventually have a bigger impact on their community. I have learned that communication barriers do not exist when love is involved. I have learned that praising God can be a one-on-one conversation or a boisterous event filled with dancing and singing. I have learned that without all the distractions of the world we can have intentional conversations. I have also learned that family is more than the family that you are born into. It is also the family that is divinely connected to you. Godfrey used the term divine connections on my first trip to Uganda. He said that we were all in Nakaseke for a purpose and where there is purpose there is provision. We were divinely connected for a similar purpose before we even knew each other. Divine connections are the reason I was able to live out that purpose placed in my life when I originally longed for Uganda. Divine connections cannot be broken, and I more thankful every day for those unbreakable connections I have with the people of Uganda. I have been blessed beyond measure, and I look forward to my future and the future of Simone’s Kids in Nakaseke, Uganda.

Just One Drop in the Bucket